anyway, i went to spain for spring break and had a fabulous time! i went to barcelona for the first four-ish days with four other ADA folksies. it rained for three of the days, but the second days was gorgeous and we went to the beach and touched the mediterranean. during the rest of the days, we wandered around the city seeing the many fabulous things - gaudi's architecture, las ramblas, some really awesome street performers, and such. 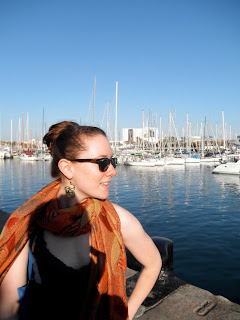 elena by the water in barcelona 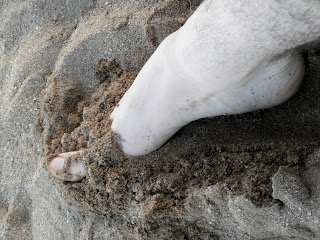 my foot on the beach!
AND THEN WE HAD TAPAS ALL THE TIME! apologies for the capslock, but tapas and sangria meals make me extremely excited. so many little mini meals that you can just keep ordering and so many different delicious things! some of my favorites included ... 1) little piece of toasted bread with crabmeat, a shrimp, and a pickle. 2) mini cheeseburger with sweet onions 3) same little piece of toasted bread with 4 delicious cheeses melted onto it. 4) roasted peppers and vegetables with melted goat cheese. 5) little piece of homemade cake with creme brulee IN IT. essentially, tapas excite me like nothing else in the world. also, i saw my tufts friend dan richards in barcelona, which was an exciting touch of home while abroad. 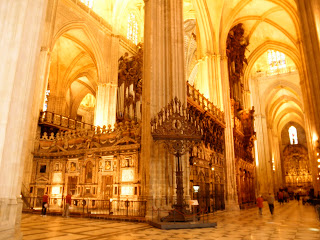 the seville cathedral
after barcelona, i flew to seville for a whopping 7 euros (europe traveler tip: if you manage to put up with ryanair's ridiculous restrictions you can go all over really cheap. but be careful and do your research because they do things like flying you an hour from the actual city, etc or charging you 40 euros for a carryon that is the wrongs shape). seville was probably my favorite city in spain - it felt the most "spanish" despite being stuffed with american exchange students. we saw a flamenco performance in a local bar, went to the seville cathedral (i can't remember if there's a specific name but it's humungous and gorgeous), and rested in the parks/streets during the 70 degree weather. it was so amazingly therapeutic. also, more tapas and sangria. happiness. also also, i forgot this until i went to upload pictures, but we also so my favorite animal, peacocks, in the garden of a palace in seville. 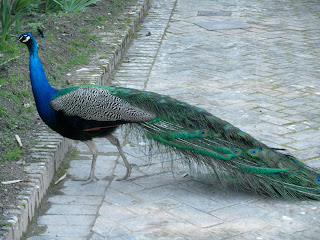 i named this peacock francesco.
for the last two days i took the train up to madrid with one other ADA friend - we met up with a third actor there along with bunches of tufts people. it was great to see some tufts friends and how fabulously they were all doing. madrid was also great, much more laid back than i had expected. i also went to the reina sofia, spain's national museum of 20th century art. i have seen tons and tons of gorgeous cathedrals over the past month or so of europe, but after a while the million portrayals of jesus, mary and occasionally peter start to blend together. ergo, it was great to wander through picasso and such for a few hours. my last meal in spain was actually sushi. and it was so wonderful. the first asian food that i have eaten since january and i missed it lots and lots.

all in all, spain was fabulous.
Posted by GiovanniHaFame at 10:34 AM