i'm back at the villa right now after my favorite weekend yet - carnevale in venice! i made the great trek with five other fabulous actors from the program - morganna, emily, stuart, maggiejo, and elena. we left arezzo at almost 1am friday night and our train arrived in venice at 5:30am. about an hour and a half into the train ride, we finally attempted sleep by arranging ourselves into one giant knot of cuddle and in the process making most of our body parts either extremely sore or numb. 'twas fantastic.

arriving in venice just before sunrise, it was already gorgeous. we took a "water bus" to lido (kind of like urban sprawl, but not because it's an island) where our hotel was, and the really nice concierge lady transferred us to a different hotel so that we could check in and get breakfast despite it being (by then) 7am.  by this point we were rather awake and excited, so rather than taking our planned power nap we ate five croissants each, got into our carnevale makeup/costumes, and headed back towards venice.

side note - one of the most awesome parts of venice is that taking public transportation (these waterbuses) is basically an enjoyable event of its own. the whole city is beautiful, so their equivalent of hopping on a dirty subway is boarding a boat and floating past gorgeous buildings while the sun glints off of the ocean into your eyes. this made me very happy. end of side note.

i think one of my favorite parts of venice is that unlike other cities, i didn't feel that i needed to rush about to see fifteen million things. just being in venice during carnevale itself was the attraction, and everywhere around me was fabulousity. everything was hugely crowded, but it almost in a calm way because the crowds were full of amazingly dressed up people, the weather was beautiful, and no one was rushing towards any specific direction. we mostly wandered about piazza san marco, seeing the elaborate and gorgeous costumes of the venice elite.

carnevale, by the way, is a two week period leading up to fat tuesday during which (traditionally) masks and disguises are worn such that class and social structure are flipped on their head. it was originally the period in which the peasants could behave like nobility and vice versa, the designated time of year for the whole world to be flipped on its head and for craziness, basically, to rule. today it has much less of the original economic/social class implications, but remains a time when people don masks and elaborate costumes. some of the most elaborate and beautiful masks/costumes in the world are on display in venice during carnevale, and it was amazing just to walk about and see how people were dressed in the street. i included a few pictures below, along with a picture of our own carnevale costumes.

in the middle of the afternoon we also headed over murano, famous for its glass art. we saw a free glass demonstration (which was crazy impressive) and then explored the shops where glass was sold. afterwards we headed back towards san marco and the carnevale celebration, but we didn't make it too far into the night before we got exhausted and headed back to the hotel for the night. today we meandered our way to the train station, seeing more costumes and beautiful sights along the way, and returned in time for kebab in arezzo. all in all, it was a crazy fun yet relaxing (in a way) weekend. moral of the story - if you ever get the chance to go to carnevale in venice, jump at it. here's a few photos of the awesome environment where i spent the last weekend : 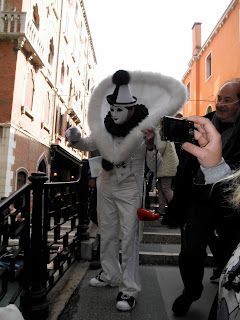 this guy's red purse wins him best carnevale costume of the weekend. 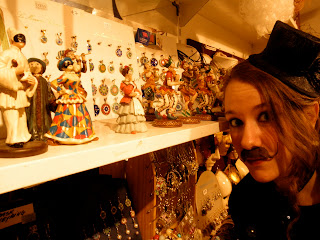 elena with the commedia characters! 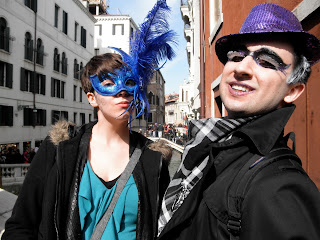 our homemade versions of carnevale, many thanks to ben nye stage makeup. 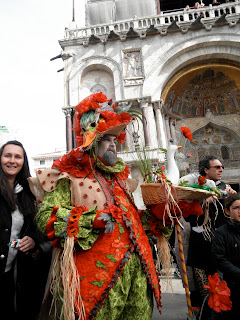 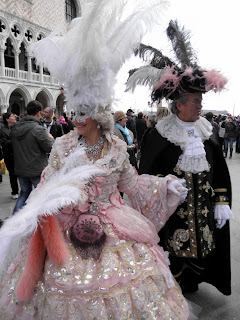 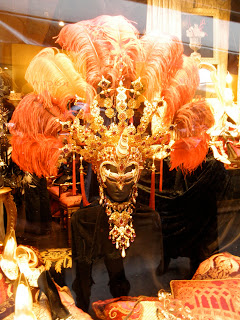 the mask stores were also stunning, as you can see. 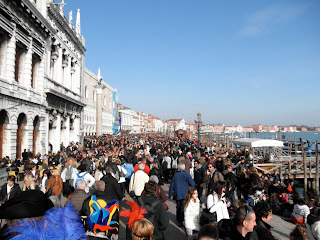 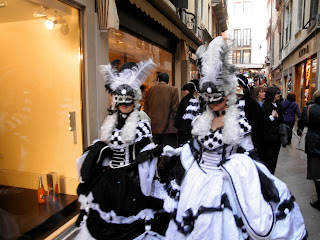 Posted by GiovanniHaFame at 1:46 PM